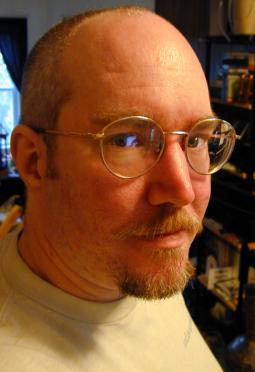 How I got the nickname Hacksaw:

Once upon a time, young David was taking a class at the big University nearby. It was a class in the history of Military Intelligence, taught by a wise, tough man named Larry Cable. Larry had been in Vietnam for sixty-five months, and it showed.

The grade for the class was based on a midterm, a paper, and a final exam. Those who were feeling lucky or smart could drop the midterm or the midterm and the paper, and just take the remaining assignments.

The final exam was a four week group project, with groups assigned based on your academic experience. Professor Cable had a specific idea in mind for the technical group, and had it written up prior to a number of the technies in the class dropping it in fear of the final.

In fact, young David was the only "tech walla" left. Professor Cable forged ahead, because he didn't think this was a problem. On that fateful day, young David was handed his assignment: Abstract a system to detect professional level computer crackers, and provide facilities for feeding the intruders chicken feed (accurate data of little consequence) and misinformation (non-accurate data of apparently great consequence). Project Name: HACKSAW.

Professor Cable (being forgetful of names, and amused by nicknames) started referring to young David as Hacksaw, often in class. This name stuck. Hacksaw then decided that the name was amusing and memorable, so he adopted it for stage use and in other parts of life.

For those who have had Dr. Cable as a teacher, and know of his troubles: Whatever may be the truth, which I can't divine, there is no denying that Larry Cable is a good thinker, and insisted that his students practice thinking. I learned from Larry. I can't say that about many instructors there, most of whom were phoning in their work, often reading out of books or lecturing in a monotone that conveyed their boredom with the subject.

Larry performed his class. He was alive. Some university needs to grab him, pay him well, and get him in front of big classes. He could make everyone show up everyday for a history 101 class, I'm sure.

Sadly, Universities regard teaching as a secondary function, far after research, which brings in grant money. In this, we all lose, as no one is training all the would be future researchers. Larry was. I hope he still is somewhere.

Favorite Book: The First Ten Thousand Cuts by dctodd. Not yet finished

Non-ob Joke: How many discordians does it take to screw in a light bulb? **

Religion: Umm, let me get back to you on that one. No, wait, what's the question? Well, to be honest, I don't have what I'd call a religion, since most people think of that as a way of saying "Who do you worship?" I don't worship anyone or anything. But I do have a leaning towards a particular philosophical school. Those in the know might be able to guess it by looking carefully at this page.

Favorite OS: Mac OSX. Though I still wish they had based it on Linux. Motto: It should just just work!

Book most people ought to read: Getting Things Done, by David Allen

Favorite Quote: "But some real scary stuff 'R' swimming around in the Collective McConscious. Don't forget that in using it, you are used by it." Me and eBeth

Minibio: For those who are tying to figure out if I am who they think I am: Mt. Healthy '83, Ohio State U. (for one quarter), U. of Cinti. (For many quarters), Harvard University (As a sys-admin), BBN (also as a sys-admin), Schoenhofs FB, iRobot.

Caveat Lector: Don't look for mentions of TV shows. I stopped watching TV in the mid 1990's. I don't feel as if I am missing anything.

** Three, because a mouse contains the seeds of it own revolutionary machine tools spinning around the world on a ladder.